There’s a cheetah in my bungalow!

Posted on February 9, 2012 by wanderingmark

Fact: Indians love cricket. So I found it quite strange that the national sport is actually hockey, although you’d be hard pushed to have a chinwag with a tuk-tuk driver or a restaurant waiter about how the national hockey team is faring. It’s a shame I’m not a fan of cricket as it’s a great conversation starter and will instantly bring a smile to a local and get them all agog with enthusiasm. In most parts of the world I find the usual ‘standard’ ice-breaker which immediately breaks down any social or cultural barriers is football (that’s soccer for those who get confused!). I find it amazing, and genuinely delightful, that there is this thing called sport which is so simple and enjoyed by so many, reaching all corners of the globe, and which rarely has any political or controversial stigma attached to it. So, essentially, if you want to dive in with the locals anywhere in the world a little knowledge of the popular sports is always worth bearing in mind. However, in India, even the popularity of cricket is surpassed by the king of pastimes  – cinema. Unlike cricket it is something both the men and women enjoy in equal measure and being home to the world’s largest film industry, Indians sure do love a bit of the Silver Screen. 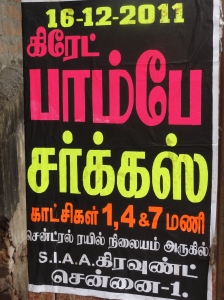 Anyone know what this is advertising?

Apparently Indians visit the cinema some three billion times a year between them, enjoying both Western movies and the thousands of Indian films made every year, many of which come from the famous Bollywood film industry centred in Mumbai – the popular movie at the moment which is plastered on every wall seems to be Agneepath, a high-octane Hindi action thriller. Although India has around 15 major languages and 800 dialects the Hindi language films are extremely popular and so for a bit of fun I will be littering the rest of this post with several commonly used English words which have Hindi or Sanskrit origins. See how many you can spot!

Since my last post I’ve moved on from Bangalore, stopped off in Chennai and now find myself in Hyderabad. I have to say the trip is going surprisingly smoothly so far which is rather unexpected as this is India after all, the land of surprises and impromptu mishaps. In Chennai, formerly known as Madras, the weather was more tropical than the other cities and so strolling round the streets was just that little bit more demanding, and thirsty work indeed. There was no let-up in the bombardment of noise from the traffic and I did well to avoid becoming a cropper to an insanely kaleidoscopic juggernaut which appeared from nowhere as I exited Amma Naana – for many expats THE choicest place to stock up on your favourite Garnier shampoo, Lindt chocolate or even a baby’s cot. It’s no surprise that the traffic police have erected various ‘rules of the road’ throughout the city advising drivers to calm it down a little as you really do have to have all your wits about you anywhere near a road, even on the pavement where rampaging motorbikes are not afraid stray. 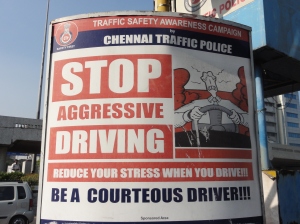 Maybe we should have these in England!?

Like all major cities in India, Chennai is BIG and is home to over 30% of the country’s automobile industry as well as an important banking and financial hub in Southern India. On my last visit in 2008 the ‘best’ mall in town was considered to be Spencer Plaza which is sat plum in the middle of the Anna Salai, the main drag of the city, but now the Express Avenue Mall has taken over leaving the former licking its wounds. The Odyssey bookshop inside Express Avenue was even piping out Metallica and Nirvana at ear-splitting volume from the speakers, so there I was singing along into my voice recorder whilst collecting prices. I made a bit of a hoo-ha when I was in the Croma electrical store and I dropped a full litre of bottled water on the floor splaying the contents all over the shiny tiles only for unaware customers with dusty shoes to walk through the spillage and leave filthy footprints around the store. A sheepish Mark then absquatulated (a satisfying word to write!) as fast as he could. 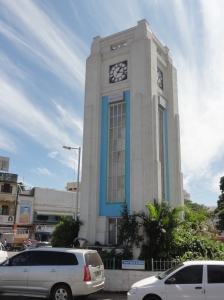 The concrete jungle of Chennai threw up a surprise I’d not seen before with its decorative Art Deco buildings sandwiched between the more ramshackle constructions which are far more typical. They exude a certain charm and hint at the days gone by when the city was under colonial rule but their appeal was soon forgotten when I was collared by one of the many so-called pariahs who live on the streets. A young girl of only six or seven clung to me and repeated “dollar, dollar” for 20 minutes pursuing me and grabbing on to my hand, even dicing with death to follow me whilst I sprinted across a busy road with speeding traffic. Whether she had family or not I don’t know but it’s moments like that which really emphasise the disparities within the social classes of India and further remind me how fortunate I am, especially when I know I’m heading back to my hotel in the evening for dinner and a roof over my head. 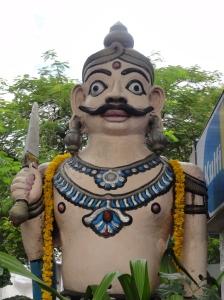 Beware of the 'tash'

Now in Hyderabad, the fourth largest city in India which, like Bangalore, has a thriving IT industry and has earned itself the moniker of ‘Cyberabad’ from pundits. Again, there are changes from my last visit with the GVK One Mall being the latest ‘place to shop’ in town. Thankfully one thing that hasn’t changed is the copious amounts of teabags they supply you with in the hotel room so I can still have my beloved cuppa in the mornings. And tomorrow will be my last morning here before I fly to Kolkata and immerse myself in all its glorious tumultuousness.

PS: And yes, the words cheetah and bungalow are both derived from Hindi!

1 Response to There’s a cheetah in my bungalow!