Posted on December 21, 2012 by wanderingmark

Rachel’s been pondering what the festive season is like for expatriates around the world. I hope you enjoy our final blog for the year. We’ll be back with more in 2013! Best wishes, Mark

More than any other time of year, the “holiday season” is probably the time when expatriates feel their status the most. They may have moved from a secular, non-Christian nation and be bewildered by the bright lights, bustling shoppers and gaudy decorations filling their host location shopping centres. Or, used, at home, to Christmas music pumped through sound systems from about October, they may find themselves searching the shops for the elusive turkey joint and Brussels sprouts in a host location where Christmas isn’t celebrated. If they have children, they may find themselves having to be particularly inventive, mail ordering the latest toy from back home, adapting whatever is available locally to something at least approximating their idea of a Christmas dinner and probably, as my parents once had to do, explain to their weeping seven-year-old daughter that yes, although the family has moved halfway across the world, Father Christmas will still be able to find her!

“A key aspect of success in international assignments is being well-prepared for the cross-cultural experience, in terms of both the business and social contexts” (I quote from ECA’s country briefing documents!)  Obviously there’s far more to cultural briefing than learning about how (or if) Christmas is celebrated in a prospective host location but it does show the importance of being prepared. Even cultures which are broadly very similar all have their own individual characteristics and traditions to celebrate Christmas, and many others don’t celebrate it at all.

Apart from that one Christmas in Singapore (when I’m glad to report that Father Christmas DID find me), I’ve never spent a Christmas away from the UK – despite all my travelling.  I’ve always been fascinated to learn about how other cultures celebrate though. When I lived in France, I had a great time teaching about Christmas traditions in the UK and then hearing how the French celebrate. Many traditions are similar; Christmas trees, a family dinner (although the French may be more likely to have oysters and goose than turkey and Brussels sprouts!), Nativity scenes, cards, carols and the like, but there are a few exceptions, Christmas crackers being a case in point. Funnily enough, the inspiration for the Christmas cracker (a brightly decorated cardboard tube, usually filled with a trinket, paper hat and a joke, all of which is revealed when the cracker is pulled apart accompanied by a loud “bang” as the chemically treated strip of cardboard inside snaps) actually comes from France – when in 1847 a confectioner’s assistant made a visit to Paris and admired their “bon bons” (sugared almonds wrapped in bright paper), adding the “bang” a few years later. The idea didn’t cross back over the English Channel however, so none of my pupils had ever seen one before and were VERY surprised by the bang when I asked two of them to pull one apart!

Mark and Hugh pulling a cracker

If you do spend Christmas away from home, it can be one of the best times of year for cross-cultural exchanges, although there can be pitfalls! My sister very nearly created great confusion amongst her French pupils when she mixed up the word for Christmas tree (sapin) and rabbit (lapin). To this day there may be a few small children in France convinced that in Britain, we decorate the “Christmas Rabbit”!

Having always believed that Father Christmas lives in Lapland with his elves, I was quite surprised to meet a close relation of his on a spring visit to Belovezhskaya Pushcha, a National Park near Brest in Belarus. In Slavic cultures, Ded Moroz (which translates as Old Father Frost) and his companion Snegurochka (Snowmaiden) come around Christmas and New Year and hand out presents. I met him during his quiet season but he was still kind enough to give gifts to the children in our party (I, sadly, was too old). Luckily we didn’t meet Baba Yaga – the witch who might steal them! 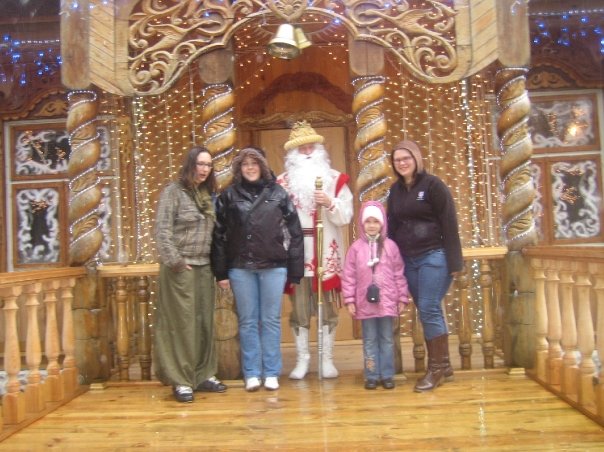 Diverse as Christmas or Winter Festival celebrations can be, many cultures have a traditional “gift giver” like Ded Moroz. Tim Harcourt has created a rather convincing argument that this person (he calls him “Santa Claus”) is just one exporter with a very good business plan http://timharcourt.com/other/why-exporters-believe-in-santa-claus%E2%80%A6. Whether you believe the gift givers are all, in fact, the same person or are many different ones, they have many different names and associated traditions across many countries. So we were set to wondering, if on our travels this year, the International Data Researchers at ECA ever might have passed by Дедо Мраз (Macedonia), Moş Crăciun (Romania), Дед Мороз (Russia), Le Père Noël  (France), Christkind  (Germany), Papai Noel  (Brazil), Өвлийн өвгөн (Mongolia), Aýaz baba  (Turkmenistan), 聖誕老人(China), Naththal Seeya (Sri Lanka)  and, of course, Santa Claus!

Christmas traditions around the world are fascinating to read about. There are many interesting websites but I found that the following article from Reuters highlights some of the other various traditions from around the world at this time of year: http://www.reuters.com/article/2012/12/07/uk-travel-picks-christmastowns-idUSLNE8B602S20121207 and this article from the Wanderlust magazine:  http://www.wanderlust.co.uk/magazine/blogs/weird@wanderlust/worlds-weirdest-christmas-traditions highlights some of the more…unusual…celebrations. KFC or whale skin for your Christmas dinner anyone?

And of course, while Christmas is for many a time of celebration, there are those who prefer to avoid any sign of it. The Lonely Planet suggests the five best places to “avoid” Christmas on the 25th December being on a plane (some people do suggest it’s cheaper to travel on Christmas day), Morocco, a remote lighthouse in Scotland, St Petersburg (The Russian Orthodox Christmas is on the 7th Jan so the 25th of December’s just a normal day) and Papua New Guinea. http://www.lonelyplanet.com/morocco/travel-tips-and-articles/20279

Having finished all our trips for this calendar year, somewhat unusually, ECA’s London-based International Data Researchers are all in the office together and we’re really getting into the festive spirit and looking forward to our office party tonight. So, wherever you are in the world and however you’re celebrating, we’d like you wish you a very happy Holiday Season and all the best for the New Year. And as a parting gift, here’s an interactive global quiz for you! Can you beat the clock: https://www.eca-international.com/Greetings/2012/