Life in the northeast Atlantic

Posted on February 6, 2013 by wanderingmark

I’ve spent the past couple of days in the rainswept, bleak north eastern Atlantic Ocean about half way between Iceland and Scotland. It’s not a place which is conducive to pleasant living but the people of the Faroe Islands have managed to forge a tolerable existence over the years. Although it is not quite in the Arctic Circle (and therefore never has periods of 24 hour darkness in the winter) it is not known for its sunny climes and the average sunshine hours for the whole of December is less than 10 (in total!) even though the shortest day of the year has five hours of daylight. So, no sun tan for me then! In fact, over the last 48 hours I’ve experienced rain, sleet, snow, sunshine, biting winds and lots of dark cloud. It’s also freezing here.

Snow-capped hills around the capital

So, why am I here? Well, it’s my first data collection trip of 2013 and is a welcome change from the last few countries I visited in Africa at the end of last year. The islands (18 of them in all) are part of the Kingdom of Denmark but they are self-governed and the Faroese people are very proud and like to consider themselves independent. The place reminds me a little of Nuuk in Greenland (also part of the Kingdom of Denmark) as it is so isolated and, well, a bit Danish. Although fairly remote the capital, Torshavn, is well equipped to meet the demands of those who call the islands home. Some 19,000 people (two fifths of the population) live in Torshavn and I’ve been surprised by what is available here. It even has its own three story shopping mall with a well-stocked supermarket, European clothing shops and a Burger King. In fact, the only item on my ‘list’ of things to price which I haven’t been able to find is tofu!

The economy of the islands is not exactly huge and 80% of income is derived from fishing, or as I prefer to call it, aquaculture. They also receive a subsidy from the Danish government every year. It is thought that there are petroleum deposits in the area and with the Norwegian oil and gas giant Statoil having been granted exploration licenses this could turn out to be a major boost for the islands if results are positive. Having said that, the locals don’t currently seem to be short of a job as the Faroe Islands has one of the lowest unemployment rates in Europe (less than 6%).

The islands have been settled for over 1000 years and the Vikings established a parliament in Torshavn – which translates as Thor’s Harbour – in the 9th Century. The isolation of the islands meant little interest was shown in them over the centuries but free trade was brought to the islands in 1856, opening it up to trade from further afield. 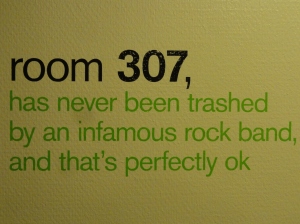 The room that I wanted!

It’s February now and Torshavn is fairly quiet as the short tourist season doesn’t start until May. The locals, however, are very friendly and crime is a rare occurrence. Their sense of humour was made apparent to me the minute I left reception at the Hotel Streym in search of my room. Dotted along the corridors are quirky witticisms in lime green which seem to give each room a character. I wanted room 307 but had to plump for room 311. I think I might be the only person in the hotel at the moment but come May the tourists will come flocking. On all of the 18 islands you are never more than three miles from the sea and there are some spectacular landscapes, not to mention an abundance of birdlife for the avid ornithologist. A recent National Geographic Traveller magazine survey saw the islands voted the ‘most appealing in the world’ so be sure to come and visit one day. Just make sure to bring an umbrella with you and leave the sun screen at home!

No doubt I’ll need my sun screen next week, though, as I head back to the vitality of Africa for my first visit to Nigeria, home to over 15% of the continent.

6 Responses to Life in the northeast Atlantic