ECA currently publishes cost of living indices for over 425 locations worldwide and my latest trip saw me rack up my 200th location where I have collected data. Yes, the geek in me keeps a list of such things! From Abidjan to Zurich, I can now add Dushanbe, the capital of Tajikistan. Of the seven ‘Stans’ located in Central Asia, Tajikistan is perhaps the least known.  Afghanistan and Pakistan are seemingly always in the news headlines for all the wrong reasons but the five former Soviet states of Kazakhstan, Kyrgyzstan, Uzbekistan, Turkmenistan and Tajikistan rarely get a mention (although the Borat character from the Hollywood film of the same name brought Kazakhstan briefly in to the limelight – much to the nation’s displeasure).  During the Soviet era Tajikistan was always the poorest of the republics and upon independence after the dissolution of the Soviet Union in 1991 it remained the poorest of the 15 nations which were created by the collapse. It also has the lowest Human Development Index of these 15. 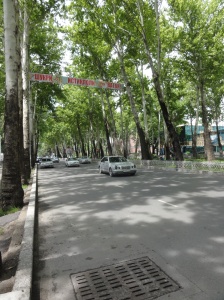 For years after the Soviet breakup Tajikistan floundered whilst other nations embraced their new found freedom. A civil war in the country broke out in 1992 when angry and unrepresented clans rose up against the new government. After five years and up to 100,000 dead a peace accord was eventually signed and the days of war-torn Dushanbe streets became a thing of the past. In the years since the end of the war it wouldn’t exactly be correct to say that the country has prospered and the government are still striving to become a trade partner of choice. Bureaucracy and corruption have been mainstays in the country for years and these hindrances will need to be removed for any real progress to be made.

The government, however, are staying positive and selling the country as a young vibrant nation at a crossroads and with huge potential. They have declared an open-door policy to facilitate broader and mutually beneficial cooperation with global investors and there have been strong GDP growth figures in recent years. Political stability, a youthful population and significant natural resources are all being used as carrots too. Tajikistan is ranked eighth in the world in terms of hydropower resources and this has proved attractive for foreign investment with several large energy projects under way. The country is home to the world’s highest dam, the gargantuan 300m high Nurek hydroelectric power station, and the construction of an even larger dam is currently in progress. 70% of exports are to the European Union and Turkey and it is with these markets which the country hopes to keep close ties. 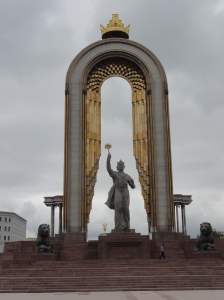 So, what is Dushanbe actually like then? I’ve been to all of the other former Soviet ‘Stans’ and was expecting much of the same here. It’s not the liveliest of places and it definitely feels a little more lacking than the likes of Kazakhstan or Uzbekistan. There are no international chain supermarkets and the only recognisable foreign shops are the Dutch clothing chain Mexx and the sports shops Adidas and Reebok. Expats would need to have a decent understanding of Russian to cope with day-to-day life in the city and perhaps even a new found love for Russian branded groceries. When the sun isn’t shining some of the streets and buildings are a tad drab but a stroll down the tree-lined central thoroughfare of Rudaki Prospeckt with a sun dappled pavement cheers things up a little.

The word ‘Dushanbe’ means ‘Monday’ in Persian and was named after being built on the site of a Monday marketplace village. There are still many traditional markets dotted around town and I had a wander round the lively Green Market with its dichotomy of sweet scented spices and foul smelling fly-ridden ‘fresh’ meat. Like many ex-Soviet cities, Dushanbe has its fair share of unconventional monuments, the grandest being the Somoni Monument, often used as the symbol of the country. As well as having the highest dam in the world Tajikistan is also home to the world’s tallest flagpole. Finished in 2011, the Dushanbe Flagpole soars to 165m and the flag itself weighs a colossal 700 kilos – surely good knowledge for a pub quiz!

The tallest flagpole in the world!

One thing the city is lacking, however, is a choice of five star hotels. Often in places like this the five star hotels are magnets for the expatriate population, providing not only security for short stays but also often having the best dining options and recreational activities. This is certainly the case in much of Africa where the vast majority of the population live below the poverty line creating a haven for the few who can afford the prices – usually expats. Currently Dushanbe’s only five star hotel is the Hyatt Regency and it really is a world away from the streets outside. I stayed at the Hotel Tojikiston which is touted as a five star hotel but in reality is stuck in the past, although a bit of Soviet era kitsch is always a bit of fun.

Join me for another blog soon from the largest city in Africa. Do you know what it is?

4 Responses to Markets, dams and flagpoles: 48 hours in Tajikistan’s capital