Cyprus after the banking crisis

The doom and gloom of the global economy over the past five or six years has never been out of the spotlight as it seems that almost every country has been affected. The Eurozone has fared particularly badly and five of the 17 members of the Eurozone have had to receive funds from the EU-IMF. Ireland, Portugal, Spain and, most markedly, Greece have all been through the mill and the latest nation to join the unenviable list is tiny Cyprus.

Cyprus makes up only 0.2% of the Eurozone GDP and is the third smallest contributor ahead of Malta and Estonia but to those living on the island the fears are all too real. The exposure of the Cypriot banks to the debt crisis in Greece and the subsequent downgrading of the Cypriot economy to junk status led to the government agreeing a €10 billion bailout from the IMF and Eurozone governments in March earlier this year to prevent the banking sector from collapsing. Although a relatively small economy in Europe, the bailout and consequential closure of the nation’s banks made global headlines. Restrictions were put in place on capital transfers to prevent a large outflow of capital and the banks were closed for ten days amid fears of a bank run.

The uncertainty surrounding the events of late March created fears of potential social problems and effects on consumer prices so I visited the nation’s capital, Nicosia, last month to collect data and capture any changes these events may have had on the cost of living.

The Swedes in Cyprus

Located in the far east of the Mediterranean Sea, Cyprus is the most far flung of the European Union nations and is closer to Syria and Lebanon than any European states. Whilst booking my flights there I was a tad confused and soon realised that Cyprus is perhaps the largest country in the world where the capital city has no airport! Instead, visitors fly in to Larnaca, some 60km south of Nicosia. The reason stems from the rather sensitive subject of Turkey’s involvement with the island. In 1974 after a Greek-backed coup in Cyprus the Turkish military invaded, eventually leading to a United Nations monitored ceasefire line being drawn up splitting the island in two. The airport in Nicosia is plumb centre of this buffer zone and has been abandoned since 1974. Today there is a rather strange situation on the island whereby the United Nations recognises the state of Cyprus but only Turkey recognises the state of the ‘Turkish Republic of Northern Cyprus’. This means that the status of the northern part of the island appears to be in some kind of limbo. That said, though, I felt no tensions at all in Nicosia, which itself is split it two by the ceasefire line.

The economy of the northern part of the island is a fifth of that in the south and it is in the south where international business is focused and where the vast majority of the island’s expats live and work. Until the recent recession the country had steady growth throughout the 1980s and 1990s and its proximity to Europe, Africa and the Middle East as well as the Suez Canal has meant that Cyprus now has the 4th largest ship registry in the world. On the surface, though, I didn’t notice any tangible fallout from the recent troubles. The shops were open as usual, the cafes were full and the multi storey car park at the huge Ikea and Mall of Cyprus on the edge of town was alive with eager shoppers and their tooting cars. Even the banks were functioning as normal!

Cyprus became independent in 1960 from the United Kingdom and although it has very close ties with Greece it also still has many British influences. Everybody speaks English, the traffic lights are identical to ours and even the post boxes are the same – except for the very obvious difference in colour! All Britishness seems to disappear when you step over the ‘border’ to the north of Nicosia though. I went over on foot for a couple of hours to stroll around the old town and it definitely feels like a different place. Gone are the chains like Starbucks and McDonalds, instead replaced by shisha bars, stalls selling copious amounts of Turkish coffee and hawkers of fake Prada purses. Rules about crossing the border have been relaxed in recent years and EU citizens can simply get their passports stamped in and out with no questions asked when using the pedestrian divide on Ledra Street. 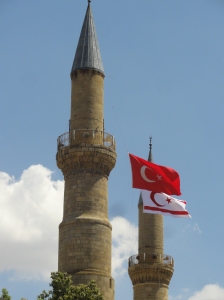 Back on the southern side life continued with Western normality and the sun shone for my whole stay but the future for the people and investors in Cyprus is still a precarious one however orderly life appears on the surface. Before the crisis in March the European Commission forecast GDP drops of 3.5% and 1.3% over the next two years but after the bailout these forecasts have been revised 8.7% and 3.9%! These are worrying numbers and clearly there is a long way to go for Cyprus to even think about the heady days of economic growth from twenty years ago.