Guest blog: Don’t call me Princess Solomon! (The ups and downs of the solo female traveller)

Posted on January 8, 2014 by wanderingmark

Our data collection trips for 2014 don’t start for a couple of weeks but I’ll be reporting on my visits to locations in Africa and Japan after that. In the meantime my colleague, Rachel, reflects on how some of her travel experiences, as a single female,  have differed from my own. All the best, Mark.

While in Indonesia recently, wanderingmark noted that he was not stared at as he had been during his visit in 2007. Although I’ll never be a white, Englishman in Surabaya, I have been a white, Englishwoman in a car mechanic’s shop in deepest, darkest Congo and I know well the alien feeling he described. The more I travel, the more I understand Treasure Island author, Robert Louis Stevenson, when he said “There are no foreign lands. It is the traveller only who is foreign”. However, as a solo female traveller, I am even more ‘foreign’ than Mark in some cultures, where a business woman, especially one on her own, is a truly foreign concept.  It has been particularly eye-opening to visit two countries in recent months, both also previous subjects of wanderingmark, where I think my gender caused my experience to be a little different from his.

The first of these, The Gambia, I visited in June. Having been to the Congo, Cameroon and Angola, I am well used to catcalls from locals, curious about the presence of an unknown Western girl. While it can be unnerving, it is rarely threatening. Reading Mark’s post on the Gambia and knowing it as a common tourist destination I thought that I would pass unnoticed there. What I hadn’t expected was the impact of “romance tourism”. The Gambia is a prime hotspot for Western women, often of a certain age, to find “romance” then shower their local boyfriends generously with gifts or money.

Consequently, many of the local men see a lone female as a potential source of income and I was constantly being approached by men eager to make a new “special friend”. From men calling out “Boss-lady” and, bizarrely, “Princess Solomon”, to more sophisticated attempts to engage me in conversation, not a moment went by when I wasn’t deflecting unwelcome, persistent attention, even from the security guard in the supermarket and the receptionist at the hotel! It was exhausting, especially trying to extricate myself from the situation without causing offence. Although the attention was never threatening, it did make me feel uncomfortable and was incredibly time-consuming. This was a side to the country Mark didn’t have to endure, and one I doubt I would have had to if I’d been there with a male friend or family.

The other location, India, (read some of Mark’s experiences here: https://ecaintlblog.wordpress.com/2012/02/19/aggro-in-agra/) is maybe more predictable, since the way in which some women are treated there is a subject of global debate. When I was there in September it was worldwide news that the death sentence had just been passed on four men who gang-raped and murdered a student the previous December. There’s no denying that the issues affecting women in India today is a vast, sensitive and complicated topic, which I’m ill-qualified to comment on. However, there were certain practical aspects to being a foreign woman in India that I wanted to share. 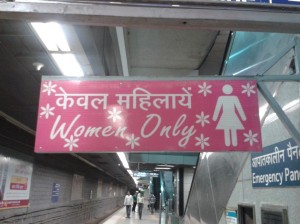 The most immediate difference from where I’m from in Europe is that gender segregation is deep-rooted in the culture. Enter any New Delhi metro station and you are greeted by the sign “women only”. Groping and sexual harassment on the metro is a massive problem and even as a foreigner, I felt far more at ease travelling in the ladies carriage (normally the first carriage) where it is a punishable offence for a man to travel.  At malls, hotels, airports or even the Taj Mahal there are separate security lines for the ladies too. This can be a great advantage at busy periods, as I found out.  That the lines are so much shorter for women is indicative of there being far fewer women travelling around than men.

In the ITC Rajputana hotel in Jaipur I was both amused and touched to be placed in the ‘EVA wing’; a corridor of rooms solely occupied by ‘single lady travellers’ and protected by a locked door with swipe-card access. It was fitted out with all sorts of extra toiletries and pink bathrobes but the emphasis was on being somewhere quiet, hidden away and safe so women felt more comfortable. It’s somewhat sobering, though, to think that a separate women-only wing is necessary to make a ‘single lady traveller’ feel safe in a hotel.

Something I also had to be more careful about in India than Mark was clothing. All female visitors to India should be aware of advice to dress modestly. Keeping shoulders covered, necklines high and hemlines low is definitely worth following. Most women wear the traditional sari or Salwar Kameez, including expatriates. Western dress is normally trousers (often jeans) and a smart blouse or top rather than dresses or skirts. My ‘data collection outfit’ is by no means indecent but I still found myself covering up with an extra jumper or scarf, despite the monsoon heat. Even then a young boy in Kolkata looked me up and down before glibly stating “nice boobs.”

Pricing alcohol in India presented some issues for me. India has very strict regulations for alcohol: many people are teetotal and in some states alcohol sale is only permitted in “wine-shops”. The unwritten social laws regarding women and alcohol are even stricter. 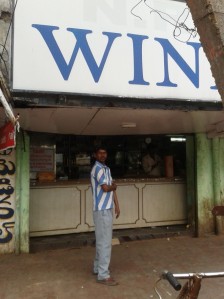 Women drinking alcohol are arguably becoming more acceptable in bars and restaurants in cities, but in 30 wine-shops across the country, I never saw another woman. An auto rickshaw driver in Jaipur even refused to take me, telling me it was a “bad place for a lady”. I have to say I agreed – the entire shop fell silent and stared at me when I walked in.

In Chennai, I unwittingly put an Indian friend in an awkward position: choosing between accompanying me into a wine shop (where, she said, no Indian woman would ever go) or sitting in the auto rickshaw, alone with the driver (again something an Indian woman shouldn’t do). In the end, the issue was neatly resolved by asking the driver to go and stand under a tree!

In the UK, gender, by law, shouldn’t affect how you are treated and this is true for many places. However, the world is a diverse place and sometimes I, like many expats, travel to places where my gender does have an impact, both culturally and legally. While I would never be sent anywhere my gender puts me in danger there are some places, as above, where I need to take more care with my dress and behaviour than my male colleagues do. Knowledge is key. Before I go to any country I always look at our country profiles, which are great for describing any local particularities, including any gender specific advice. Nevertheless, there will almost, always still be a few surprises once you get there, no matter how much research you do,

Rachel is part of ECA International’s International Data Research team. She travels the world regularly, capturing price data for goods and services to assist with cost of living comparisons around the world.

4 Responses to Guest blog: Don’t call me Princess Solomon! (The ups and downs of the solo female traveller)