Thawing out in Sapporo

Posted on March 7, 2014 by wanderingmark

When I meet new people and tell them what I do for a living they inevitably end up asking me what my favourite country is that I’ve visited. My stock reply is usually Cambodia but I think this is more because it was the first non-western country I visited and so the culture shock and weather really stood out from that visit. Oh, and Angkor Wat really is amazing too! A common second question asked about my travels is “Where do you most want to visit that you haven’t yet?” My stock reply for this question used to be Japan – until last week! 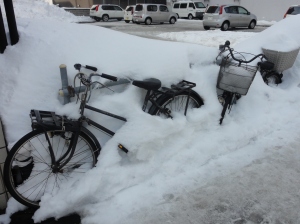 With all my travels (some 146 countries now) I think I’ve encountered most of the world’s major cultures. From Eastern and Mediterranean Europe to the USA and South America. From the Arab worlds of the Middle East and North Africa, and the poverty of sub-Saharan Africa to Australia. And from Russia and the former Soviet Republics to bustling South East Asia. But I’d always thought of Japan as the one major culture and society that I’d not experienced. So it was with much anticipation and excitement that I touched down on the icy runway of Sapporo, situated on the northern island of Hokkaido, and Japan’s fourth largest city by population.

My first act upon arriving was to navigate my way to the train station that would take me in to the city centre. This was a doddle, with most signs in both Japanese and English. Secondly I had to get from the train station to my hotel via the Metro system. Again, this was a doddle as the ticket machines even speak to you in perfect English. As well as being punctual to the nanosecond, the Metro is also quite cheap  (something I’m not used to back in London – the most expensive subway system in the world). Everything going fine so far then and no ‘issues’ with the language barrier yet. 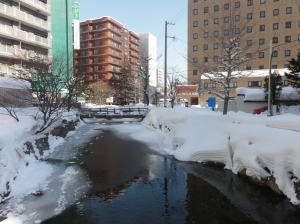 When I exited the Metro it came as quite a shock to see that the reports I’d heard about snow storms gripping Japan were evidently very true. London has been fairly mild this winter (if a little rainy!) and I’d recently spent three weeks in South Africa so the smack of cold air against my face came as a surprise. With gloves and hat packed away in my suitcase I had no alternative but to plough on (literally) through the snow to the hotel. And there was a LOT of snow – evident by the vast amounts of white on display in my photo slideshow above. The snow piles were as high as me in some places but the sun was shining and the thaw had begun. This meant that it wasn’t actually snow I was walking on but that horrible slushy stuff which makes everything wet and gunky. And then the inevitable happened and I slipped, then wobbled, then crashed to the ground like a sack of potatoes. A little old lady sort of stopped and looked at me with her arms in the air as if to say ‘I feel sorry for you and I’d help you if I could but I’m a little old lady and would only fall over myself if I tried to help’. Anyway, my plight was taken seriously by others and several local folk came to my aid. Not that I really needed any of course, they were just being so terribly polite – something this country does oh so well.

I got to the hotel at about 9am only to be told that check-in starts at 2pm. Usually this is not a problem and in most countries they don’t question it if you arrive early, but here everything runs like clockwork and rules are rules. So what was I to do for five hours with no sleep and jet-lag seeping in? Well, I ventured straight out to the supermarket of course. 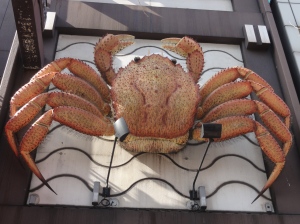 Hairy crabs are a Sapporo speciality

I’ve been getting used to the supermarkets here in Japan for over a week now. They’re not really that different to those we have back in England, it’s just that many of the products are so very different from what I’m used to. Sure, in some countries there are local specialities and availability of certain goods varies from place to place but in all of the 125 or so countries I’ve collected data I’ve never walked down so many aisles not having a clue what I’m walking past. I’m not a big fan of Japanese food or sushi and the like but there are so many ‘unusual’ products available which you just don’t get elsewhere in the world. I can’t even begin to describe some of them as they are pretty much indescribable – especially given the fact that all labelling is (not unsurprisingly!) in Japanese writing. In fact, I’ll try and take some photos on my next supermarket visit tomorrow and post them in my next blog so you can see what I mean! Sapporo is famed for its giant hairy crabs and there were plenty of these creatures in the supermarkets too.

Two hundred years ago Sapporo was little more than a fishing village in the isolated north of the country and as such is different from most other Japanese cities, with a more organised approach to town planning and a lack of historical sights. Today there is just shy of two million people in the city – the first in Asia to host the Winter Olympics, back in 1972. Skiing is big business here, with heavy snowfall for six months of the year in the surrounding mountains of Hokkaido. It’s also home to the Sapporo beer company, which I can attest is a fine beer!

I’ve since left the thawing in Sapporo and have been using my travel experience to survive the challenges of life in the largest city on the planet. More soon – along with photos of foods that nobody except the Japanese seem to eat!