Guest blog: Male – the ‘other’ Maldives

A happy 2015 to all our followers! The team and I are currently preparing for this year’s trips and will be back on the data collection trail shortly. In the meantime, my colleague, Shona, shares her experiences of Male. Best wishes, Mark.

Following a recent trip to India, I had the pleasure of a stop-over in the Maldives to collect data. The smallest country in Asia, and the smallest Muslim country in the world, the Republic of Maldives is made up of 1,190 coral islands which are grouped into 26 different atolls. Of these, only around 200 of the islands are inhabited, and another 80 are used exclusively as tourist resorts.

Hanging bananas on the streets of Male

Despite being prominently known as a luxury holiday hotspot, with around 28% of the country’s GDP coming from the tourist industry, the capital, Male, offers a very different experience. Located on the largest island in the country, with a population of over 100,000 people, the island is the fifth most densely populated in the world, and a busy hub compared to the idyllic retreats most people imagine the Maldives to be.

It makes a nice change collecting data in a city that can be entirely traversed by foot- most of the roads are so narrow in fact that I was surprised that the local taxis managed to squeeze down them. A variety of small supermarkets and other stores are dotted around the island- some better stocked than others. Despite enjoying the freedom from public transport, I soon learnt the hard way that having a map is a must for newcomers here as the roads and so small and winding, it becomes very easy to get lost. 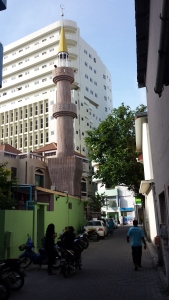 An alleyway in town

Converted from Buddhism in the 12th century, the islands of the Maldives now follow traditional Islamic law. This means that shops close for 15 minutes after the call to prayer (which, added to the fact that a number of stores close for up to two hours over lunch, makes data collection a test of patience!), and in the case of the Maldives includes a ban on bringing symbols of other religions into the country. This helped explain why the Thai restaurant I visited had pictures of Venice and other European destinations on its walls, rather than the Buddhist statues and paintings normally associated with Thailand. Bringing alcohol and pork into the country is also restricted as it is illegal to consume these in Male. This applies to tourists as well as locals, and those in desperate need of a drink will have to hop on a boat and travel over to Hulhue Island, where the airport is located, to get their pricey fix. Fortunately for the throngs of holidaymakers who visit, the island resorts are exempt from the ban.

Alongside the Muslim traditions in the Maldives, there also remains a strong belief in the powers of black and white magic, and the September 2013 elections made headlines across the world when police detained a coconut deemed to be acting suspiciously by a polling station. The police called in a white magician who confirmed that the coconut was in fact innocent and was later released without charge.

Hotel chalets over the sea

Whilst visiting Male, I heard numerous grumblings about the price of electricity here. Residents face paying incredibly high power costs as electricity is supplied through diesel fired generators. This makes it one of the most expensive places in the world for power, having the highest running costs in South Asia. Male also suffers from water shortages, exacerbated last year by a fire at the island’s only water treatment plant. Desalination plants provide the only form of drinkable mains water for residents and water supplies had to be sent over from nearby countries such as India, while international engineers arrived to try and tackle the problem. The shortages forced thousands of locals to relocate to nearby islands which were unaffected. Along with these ongoing issues, the Maldives is the lowest country in the world, with the highest point being just 2.4m above sea level, and therefore faces the very real threat of being completely submerged should global warming lead to rising sea levels. To draw attention to this issue, the then president Mohamed Nasheed held his 2009 cabinet meeting underwater.

The reality of life on Male differs greatly with what most imagine the Maldives to be. I did manage to squeeze in a visit to one of the famous paradise island resorts, and the 30 minute boat trip couldn’t have left me feeling any further away from the hectic capital.

Shona is part of ECA International’s International Data Research team. She travels the world regularly, capturing price data for goods and services to assist with cost of living comparisons around the world.